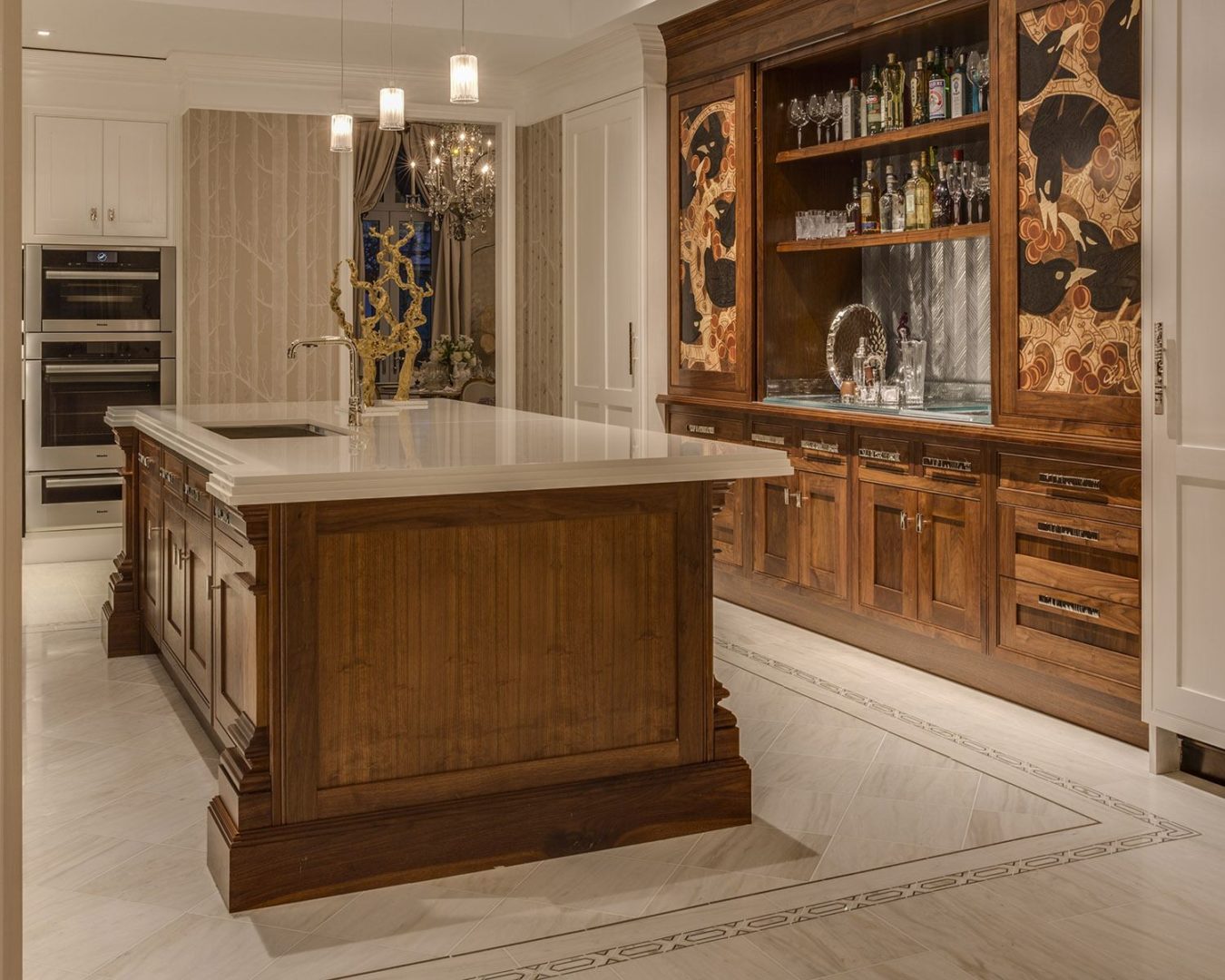 U.K. based Clive Christian Interiors, renowned for its luxury statement kitchens, has selected international tile brand AKDO to enhance their room design at the 44th annual Kips Bay Boys & Girls Club Decorator Show House, open from May 12 through June 9 at the Carlton Townhouse, 19 East 61st Street in Manhattan. Admission is $35 and proceeds benefit the after school programs at The Kips Bay Boys and Girls Club. 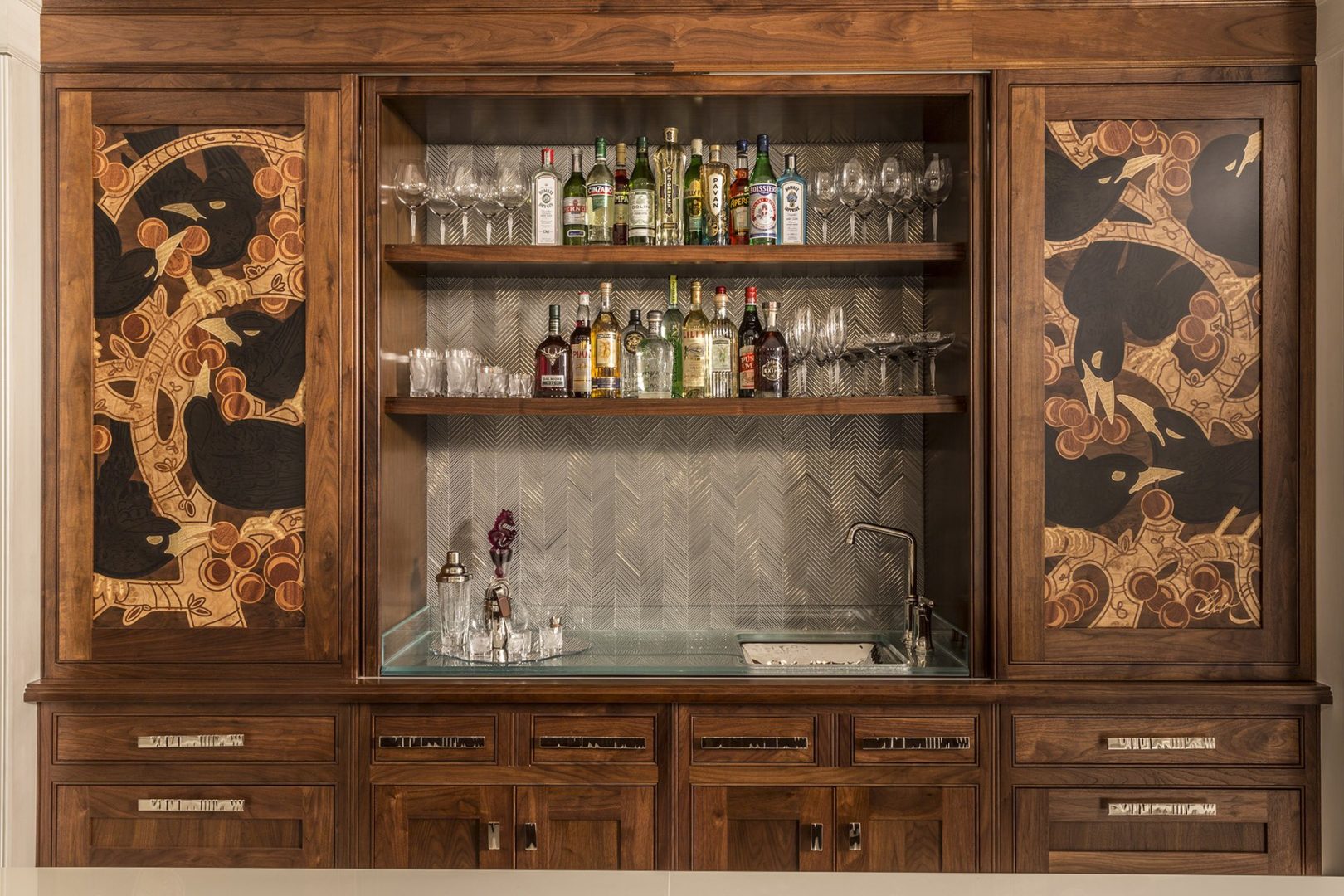 A sneak preview of AKDO’s new Textile Glass; its glittering texture lines the bar back.

For her Orient-Express-themed kitchen and dining space in what is widely known as the nation’s preeminent designer show house, Clive Christian Designer Jacqueline Sirianni focused on design elements that reflect in a modern way the halcyon days of the great train, the 1930s. She selected AKDO products for the walls, backsplashes and floor. AKDO Creative Director Kate Sterling and Vice President Dan Martel worked with Ms. Sirianni to create tile installations that represent both the designer’s period inspiration and the latest trends in tile and stone. “The Kips Bay Show House is where people come for design inspiration as well as to see and experience the newest and state-of-the-art interiors products and design,” said Mr. Martel. “We feel compelled to offer our latest, most innovative offerings along with classics.” 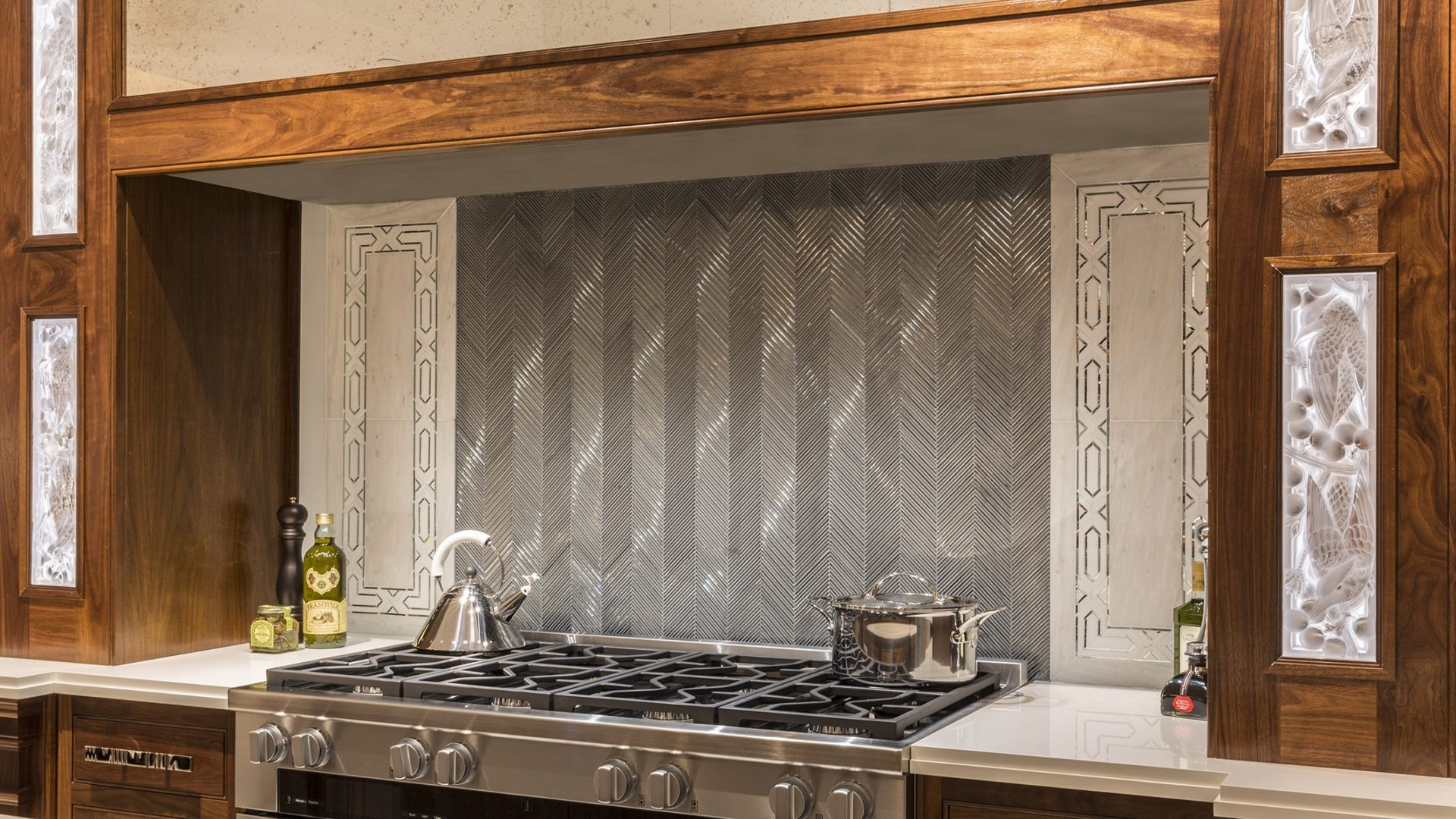 For two feature walls AKDO offered Ms. Sirianni the exclusive world premiere of an upcoming AKDO glass mosaic collection inspired by the textures and patterns of fine textiles and expressed in handcrafted micro mosaics of metallic glass. She selected Textile Glass in a herringbone pattern called Ikat, in which matchstick sized pieces of glass in alternating clear and frosted finishes shine in a subtle yet sparkling Silver Silk hue. This glamorous new mosaic is featured on a central “hearth” area above a large Miele range, and also behind an elaborate bar. The subtle mix of frosted and glossy glass finishes in the mosaic is the modern counterpoint to a similar effect seen in the antique and current Lalique crystal throughout the space. Siranni has made the bar a surprise focal point in the room by hiding it behind custom wood marquetry sliding doors that open to reveal the stunning silvery serving area because, she says, “The best parties always happen in the kitchen.” The Textile Glass wall begins behind the sink and extends up, adding a dazzling backdrop to open shelves of barware and spirits. 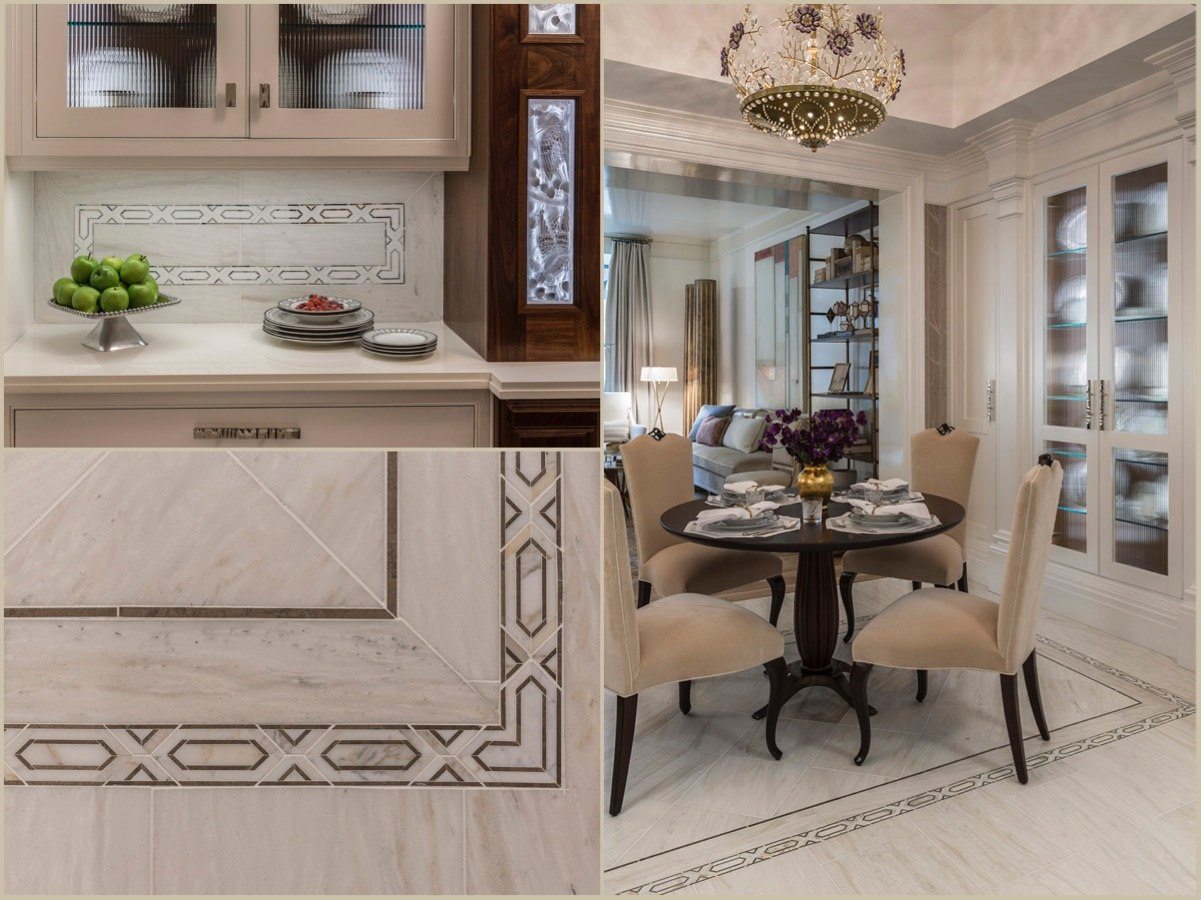 White Haze marble is the new, softer alternative for a chic white kitchen look circa 2016 and beyond. Allure radiance borders create carpets to define the island and breakfast areas.

AKDO’s White Haze Marble, a softer-hued new alternative to the classic white marbles, creates a rich, elegant feeling on the backsplashes and floor, punctuated with custom Radiance Borders from AKDO’s renowned Allure Collection. On the backsplashes the border appears in silver mirror to complement the silver Textile Glass and on the floor in Blue Lagos Marble, with a narrow inner line of Blue Lagos that defines the borders as a carpet to visually contain the island and dining areas as separate spaces. This is a “faux architecture” technique used by designers to create a feeling of multiple spaces while keeping the room design open and airy. 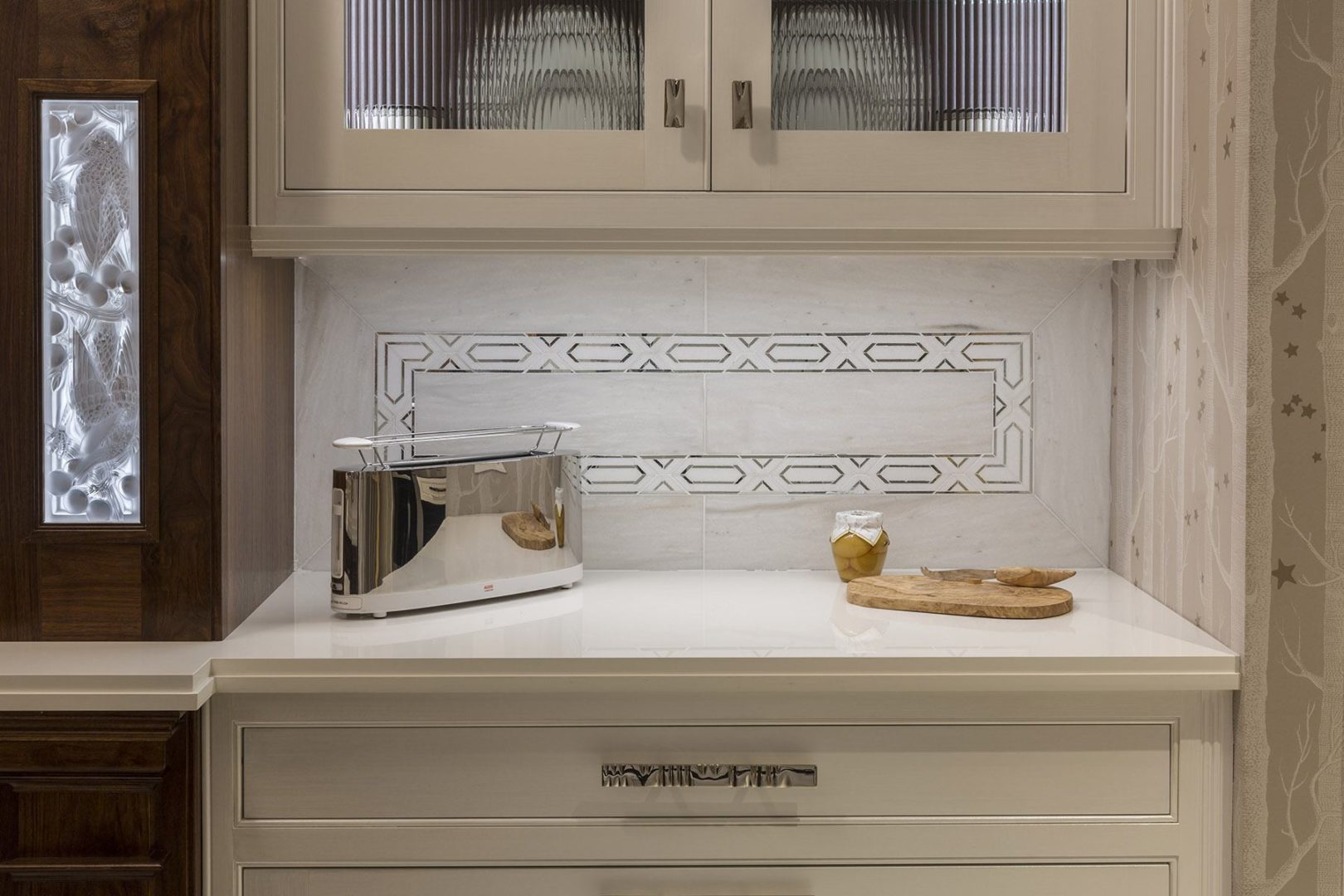 White Haze marble with its gentle ‘greige’ tones mixed with cloud white is a sophisticated design alternative to the more commonly used white stones for kitchens.  The soft, subtle movement and tone of this stone is the perfect complement to the warm, rich wood of the cabinetry and the pale camel velvet Christopher Guy dining chairs, the wallpaper by Cole & Son, soft white paint by Farrow & Ball, as well as the multiple beige tonalities that distinguish the adjoining two sitting rooms by Suzanne Kasler and Alex Papachristidis. AKDO has long been known globally for its handmade mosaics, superb and unusual stone, because the firm owns its own quarries, factories and handcraft ateliers in Europe and Asia. “White Haze is poised to become the next trend in white kitchens and baths with this very relevant warmer, more soothing tonality,” notes AKDO’s Dan Martel.

Spice up Your Subway Tile with These Grout Ideas & Trends

The Best of Both Worlds with Porcelain Slabs