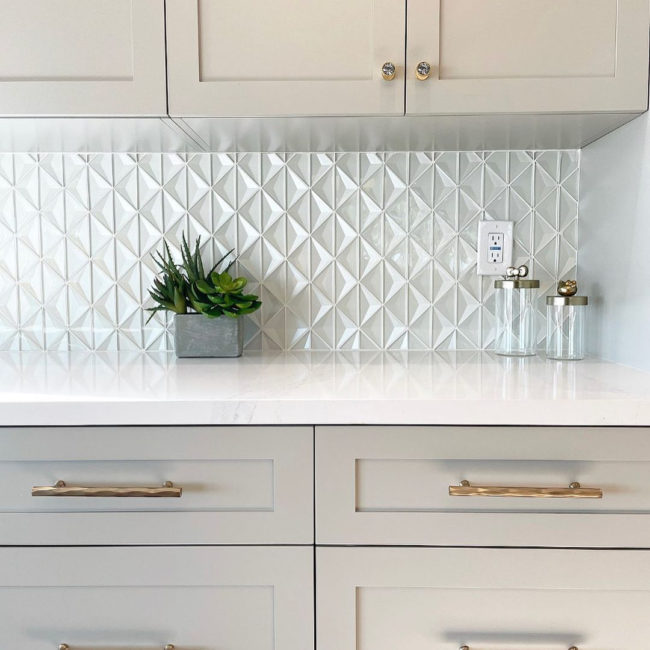 Designed in collaboration with world-class architect, Jeffrey Beers, the Immersion collection is one of AKDO’s most distinct collections of glass tiles and mosaics. Influenced by Jeffrey’s passion for glass as an art form, the notion for the collection occurred organically and as it is centered around water, the element most suggestive of glass and its purity. Known for his ability to create social gathering spaces with nuanced fluidity; Jeffrey Beers’ designs offer an immersive experienced while transcending trends. Similarly, the pieces in the Immersion collection provoke an emotional response through multi-faceted geometric profiles, reflecting light based on their surroundings.

Reminiscent of ice sheets floating across the water, the Crystallite pattern in the Immersion collection has been circulating around the social media world, due to its statement making, Pinterest-worthy charm. With its three-dimensional nature, the color of this glass mosaic shifts with the ever-changing surrounding light, adding further depth to any space it is featured in. Available in a mixture of moody, cool hues that complement the marine theme of Immersion, this glass mosaic is offered in a range of bold metallics, including a classic Silver Silk, a metallic navy, aptly named Voyage Blue, and Peak White, a metallic white evoking the aesthetic of glistening icecaps.

Read on to see some of our favorite spaces where Immersion Crystallite made some serious design waves. 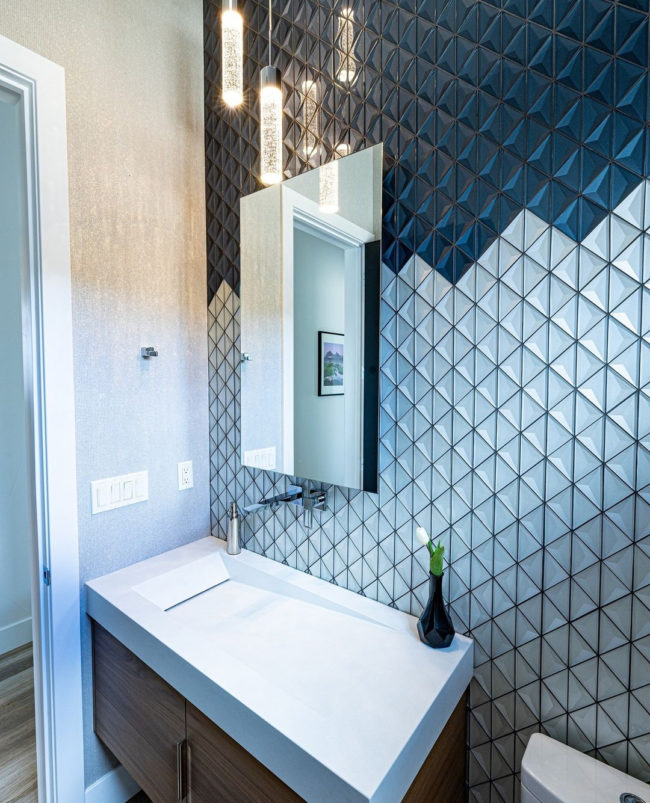 Designer Emily Esposito mixed Crystallite Voyage Blue and Crystallite Peak White to create a daring, statement-making bathroom backsplash. Using tile to bring in the trend of color-blocking creates a lasting impression in this powder room, allowing for the backsplash to serve conversational piece all on its own. 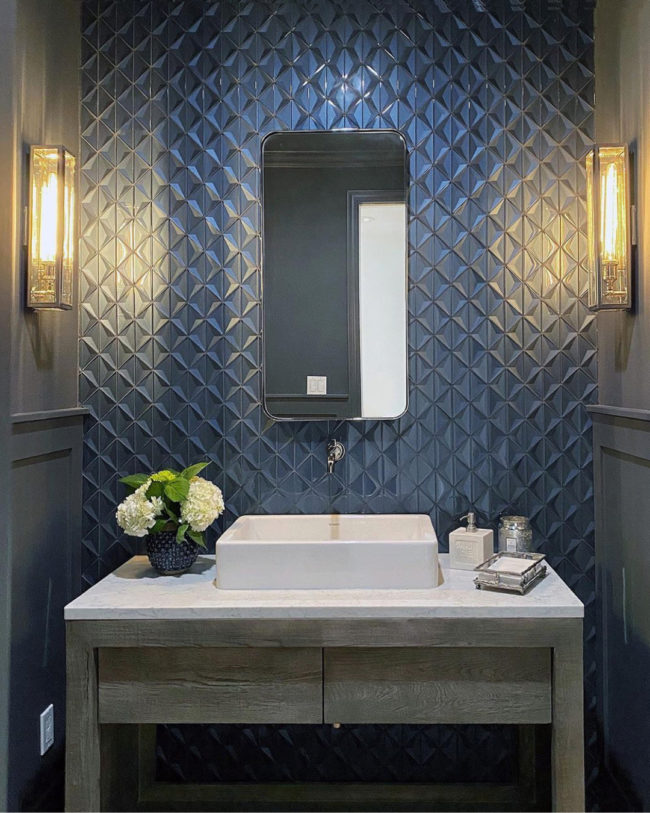 Playing off the cool tones within the reclaimed wood vanity, Crystallite Voyage Blue adds an element of dimension to this powder room backsplash, in a modern but still cozy and chic way.

An All-White Kitchen with Added Texture 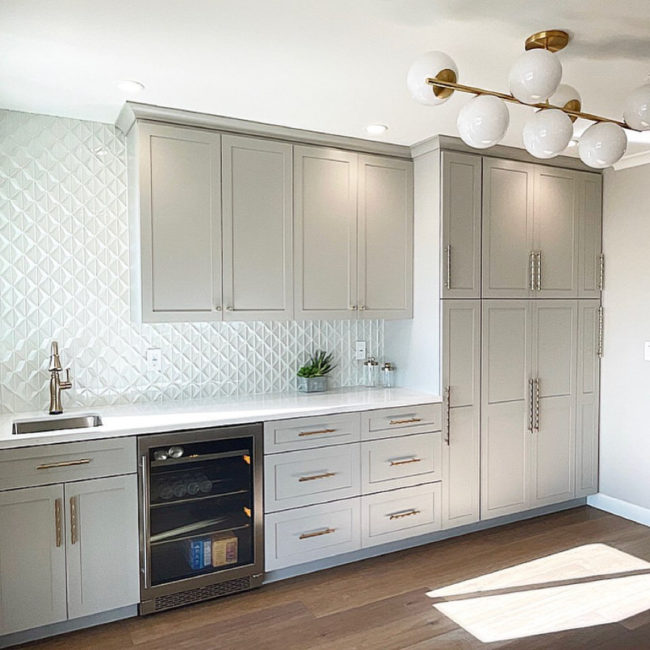 Obeying the neutral air and brightness of this stunning wet bar, Crystallite Peak White adds the perfect amount of texture to this kitchen backsplash, creating a captivating layer with a punch of visual impact.

Shining by the Stovetop 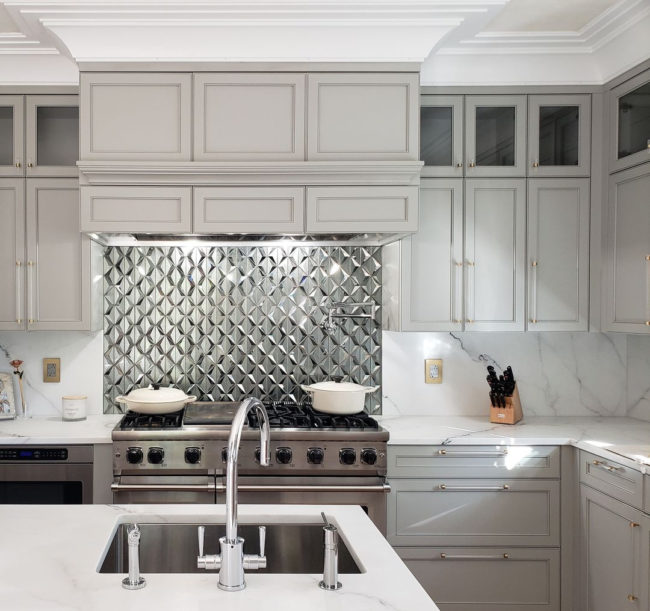 Crystallite Silver Silk amps up the drama in this kitchen, adding a touch of glamour to this gray hued kitchen backsplash. Using a metallic glass mosaic as a backsplash inset over the stove is the perfect way to wow any-house guest, without becoming too overwhelming. 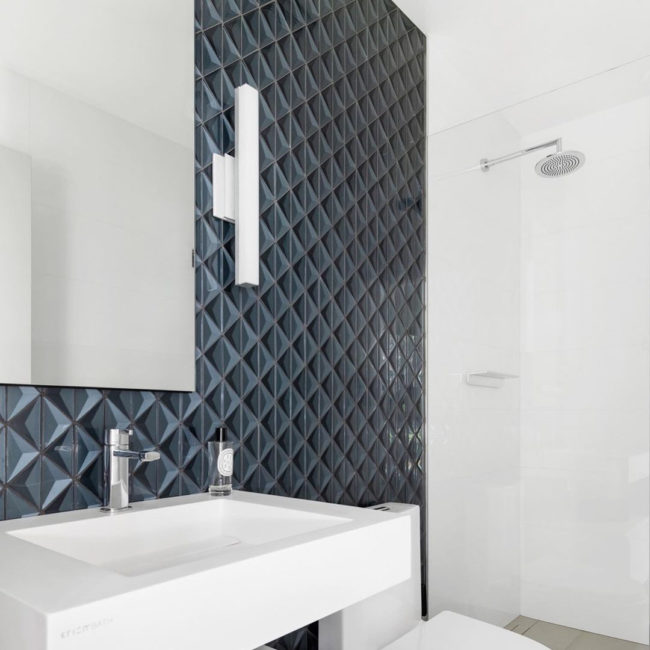 The stately navy hue of Crystallite Voyage Blue brings a pop of color to this modern and sleek bathroom. The multi-faceted triangles within this glass mosaic creates an added texture to the sleek and sophisticated fixtures.

A Splash of Color 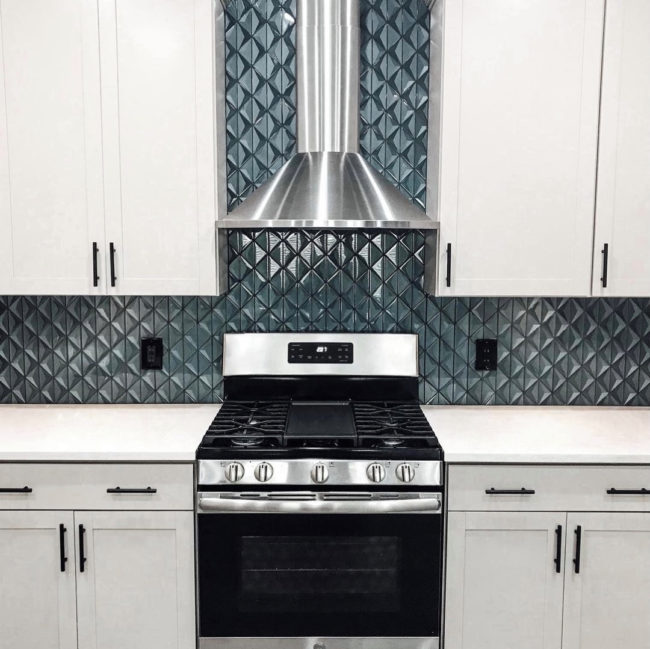 The easiest way to add personality to a kitchen is by adding color. Crystallite Voyage Blue enlivens the white cabinets and countertops while perfectly complementing the stainless steel appliances, with a calming hue of blue.

2021 in Review: Our Most Beloved Spaces