Here’s what happens when our Creative Director gets turned loose with her iPhone in Istanbul: magic!

In this ancient city that spans two continents, inspiration is everywhere, so when the editors of Traditional Home invited Kate Sterling to share Istanbul with their Instagram followers for a weekend last summer, they got more color, more pattern, more natural and manmade beauty than you could ever fit into an average weekend. 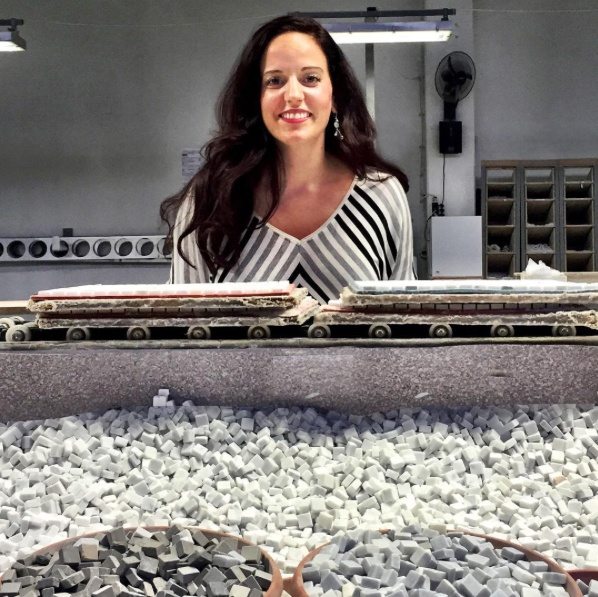 Above, Kate checks on the progress of some new mosaic products she’s designing at one of AKDO’s stone handcraft ateliers outside of the city. On the way back, she stops at one of the many colorful farm stands to purchase some tomatoes for the next morning’s breakfast. Vegetables at breakfast are just one of the charming food traditions of this land, which is part Europe, part Asia, part Mediterranean and quite globally influenced. 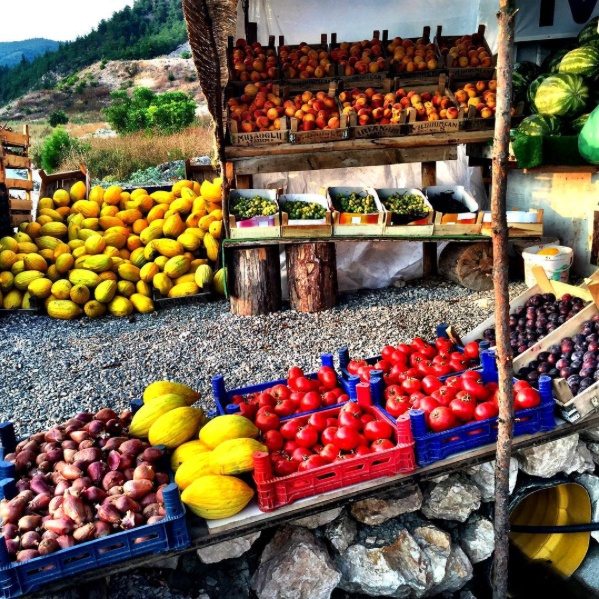 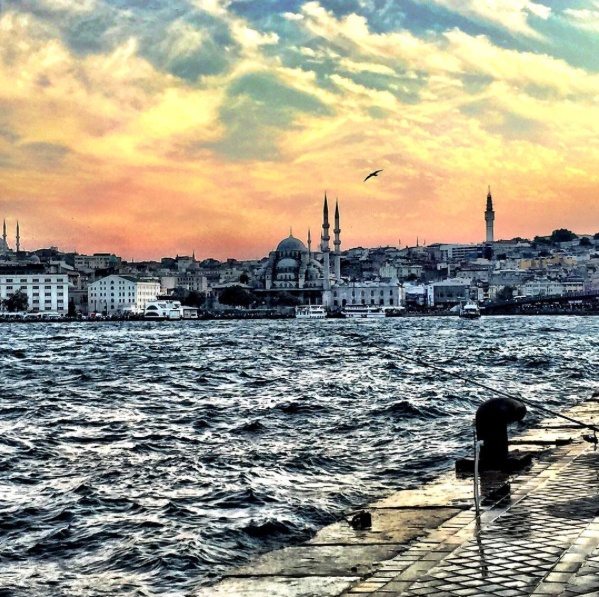 Lucky for  Trad Home’s IG followers, Kate arrives back in town just in time to catch sunset over the Bosporous, as the last of the fisherman prepare to call it a day. 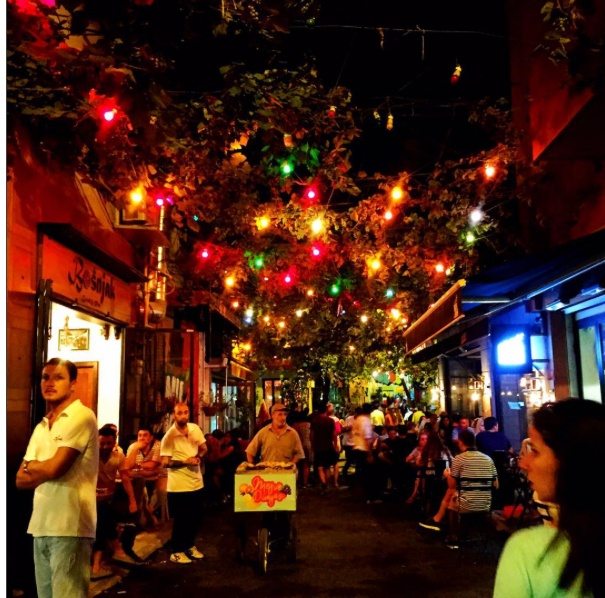 The merrily-lit, vine-covered canopy over a street in Karakoy makes it a popular al fresco dining destination. 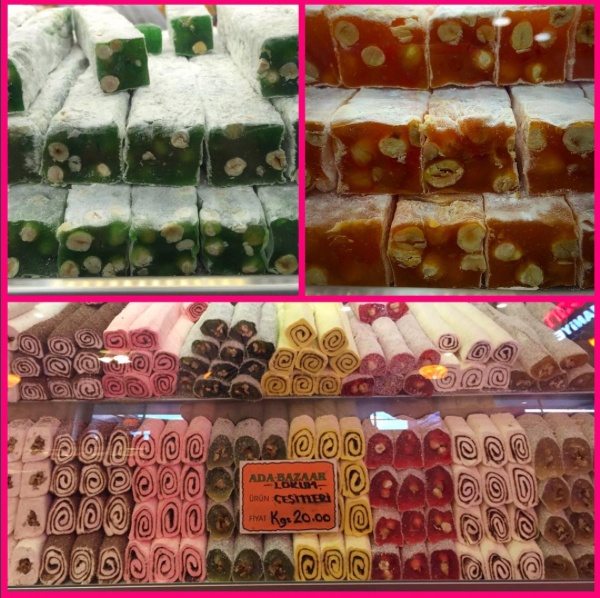 After dinner, some sweets, including the classic Turkish Delight. 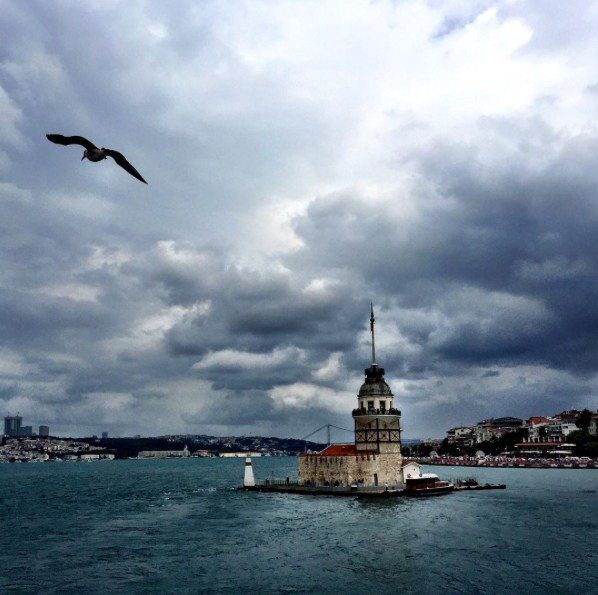 Before breakfast on Saturday, the clouds roll in over the Bosphorus, and Kate snaps a moody shot of Maiden’s Tower that perfectly captures the mystique it has held since antiquity. There are many legends about the construction of the tower and its location. According to the most popular Turkish legend, an emperor’s beloved daughter was told by and oracle that she would be killed by a venomous snake before she turned 18. The emperor built a tower on this tiny island surrounded by water to keep her away from any snakes. The princess was placed in the tower, where on her 18th birthday, the emperor brought her a basket of exotic fruits, delighted that he was able to prevent the prophecy. However a snake had been hiding among the fruit and bit the young princess and she died in her father’s arms, just as the oracle had predicted. Today, the tower is home to a posh restaurant, and is visited by romantics and the occasional seagull. 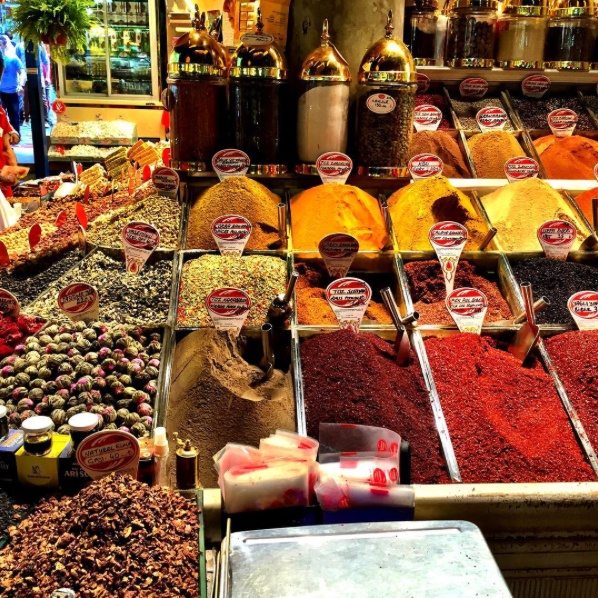 It wouldn’t be a trip to Istanbul without a visit to the Spice Bazaar. 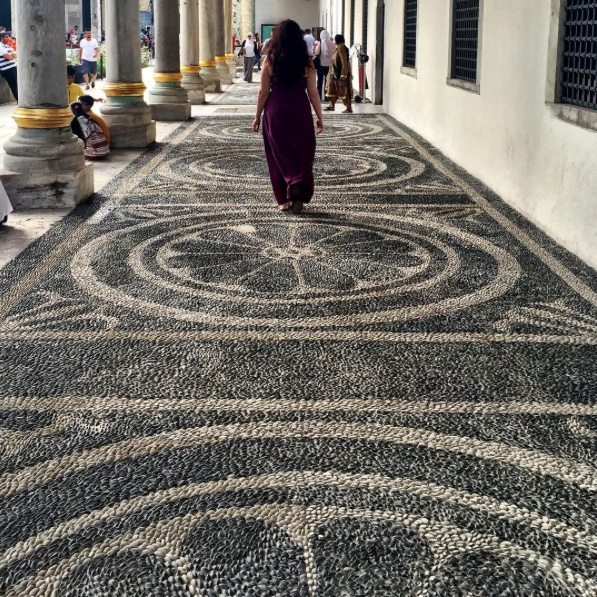 Kate strolls the covered walkways of the ancient Topkapi Palace, a historic landmark in Istanbul, whenever she is in the city. She says, “It was these very walkways that inspired me to design the Eternity collection for AKDO. The artisans making the mosaics still practice the same ancient art, hand cutting and placing each marble piece until a work of art is created.” 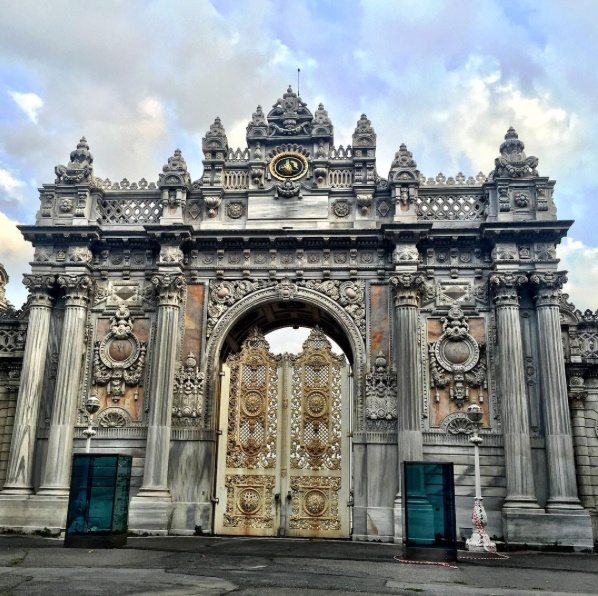 Shut the front door, those sultans knew how to swing! The stunning and beautifully leads to the Dolmabahçe Palace is carved from local natural stone. 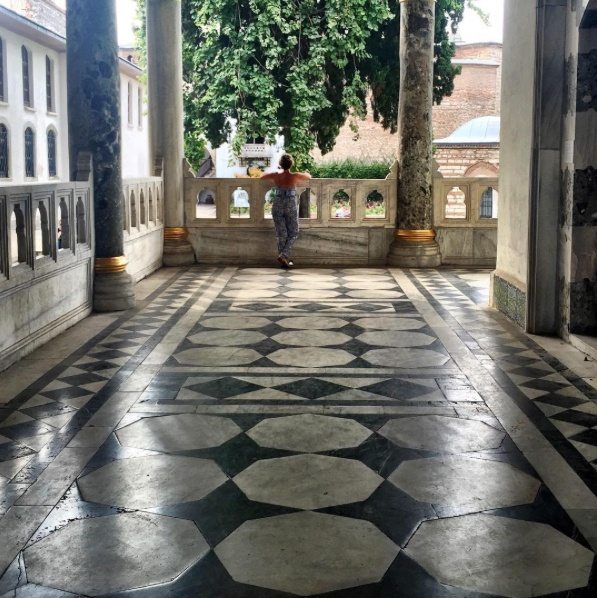 Topkapi Palace is definitely one of the top places in the world to see crafted natural stone. It has all been in place since antiquity, elaborate gate that so we love to show people these images when they ask us, “Will my stone last?” Yes, it surely will, and chances are it will look more and more beautiful with time. 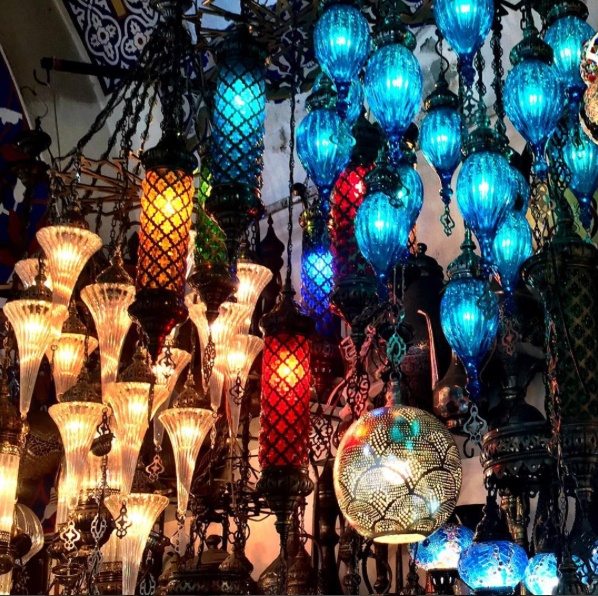 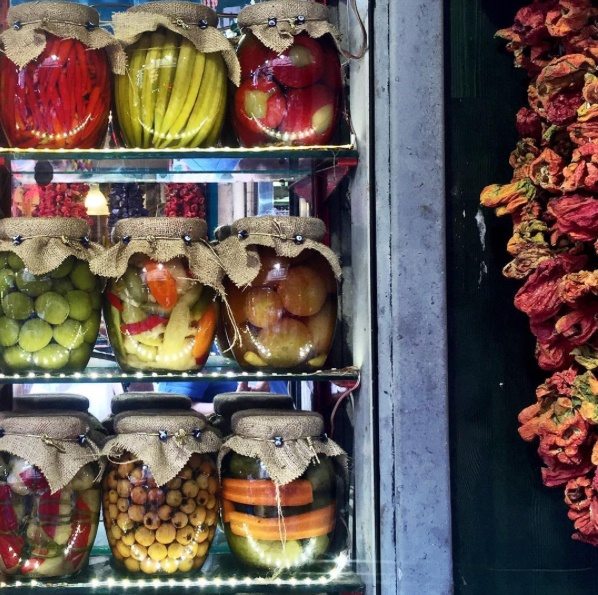 Back at the Bazaar for some gorgeous hanging pendant lights and picturesque pickled vegetables! 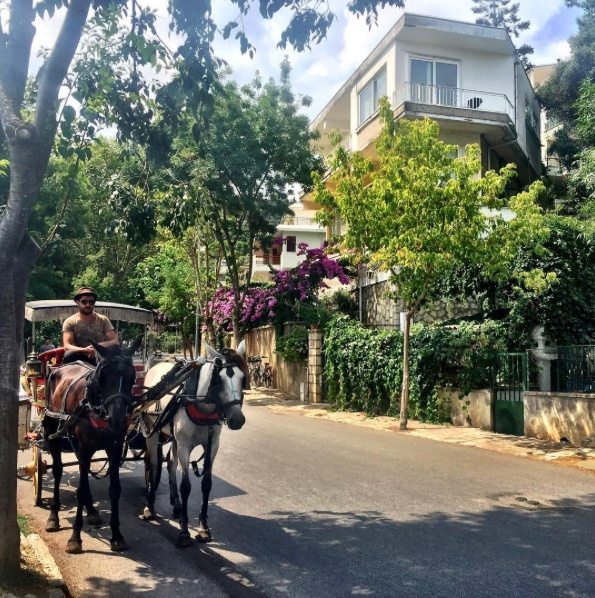 Kate recommends taking a ferry ride across the Bosphorus to visit the Princes’ Islands, a posh place to live, with lush gardens, away from the madding crowds. 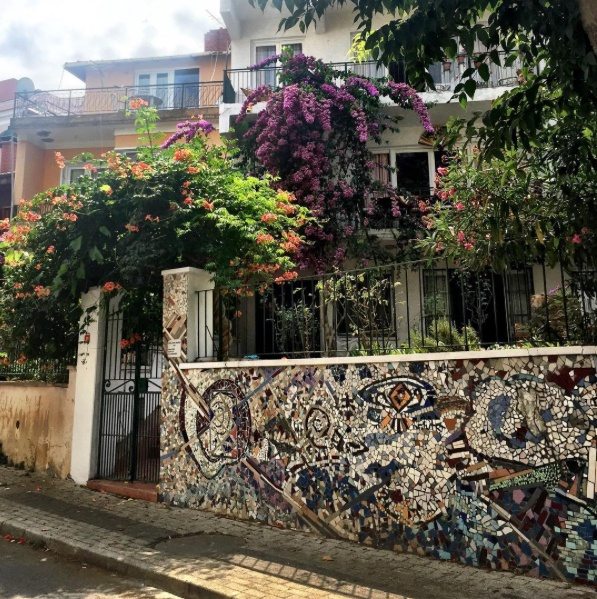 There, she stumbled across this very original mosaic wall, which, while mostly abstract, does feature a traditional Turkish Evil Eye symbol, said to ward away evil. “Finding this funky piece of art in such a surprising place made my day,” said Kate. 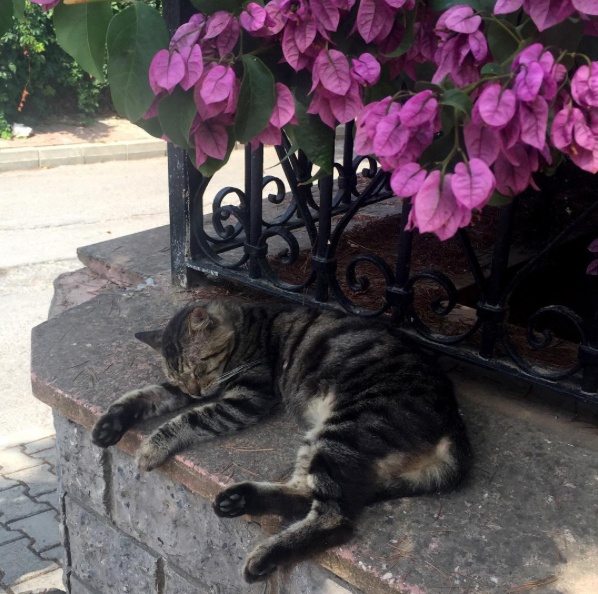 Yes, this is a Turkish cat, chilling under the bougainvillea. Istanbul is one of those cities with lots of happily wandering felines, many in perfect poses for #catsofinstagram.

2021 in Review: Our Most Beloved Spaces